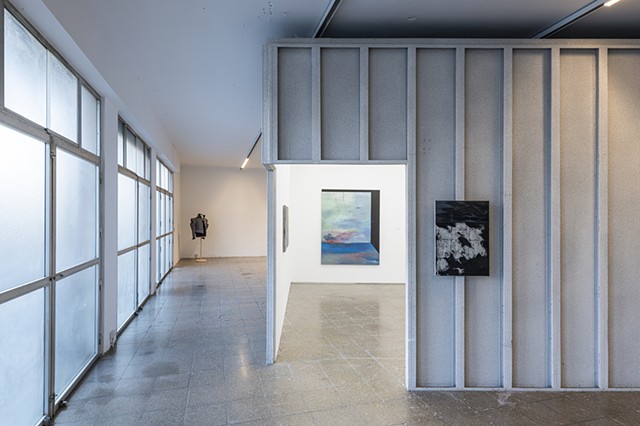 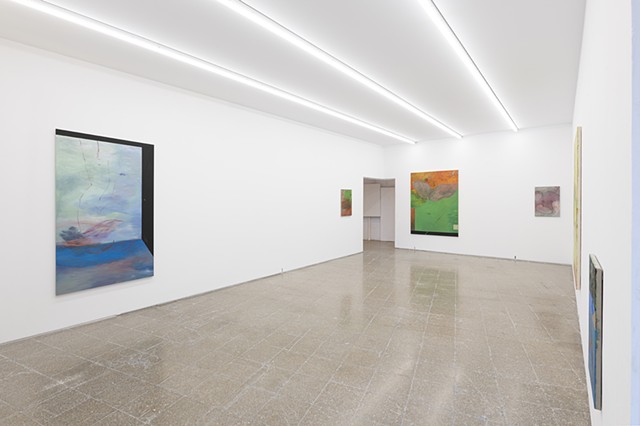 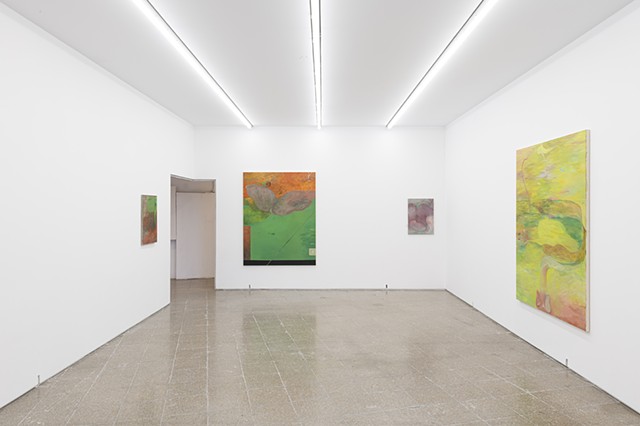 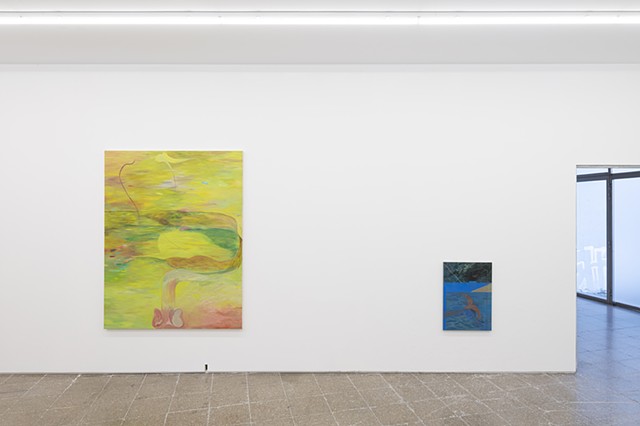 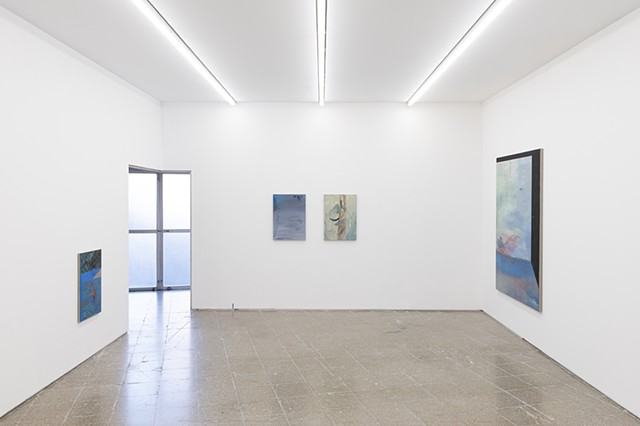 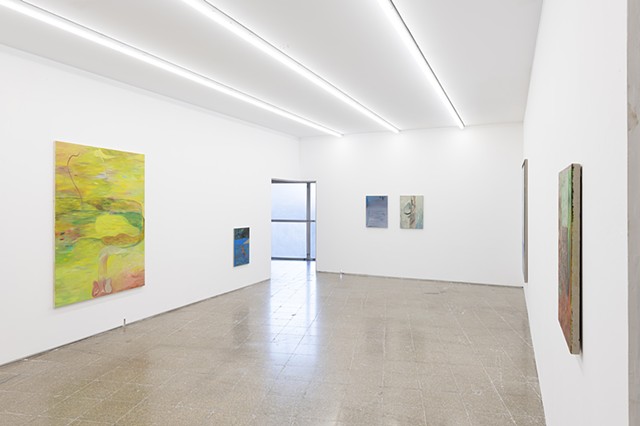 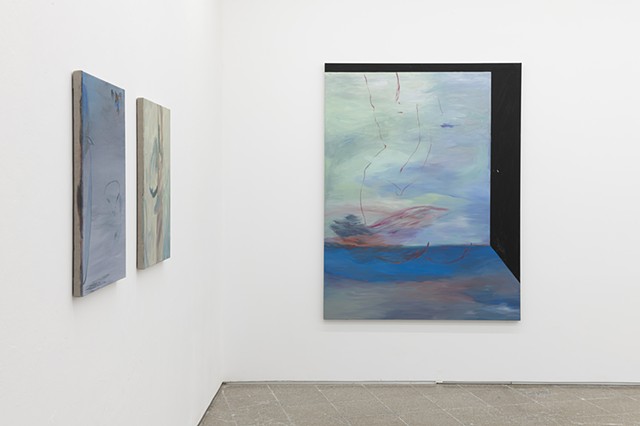 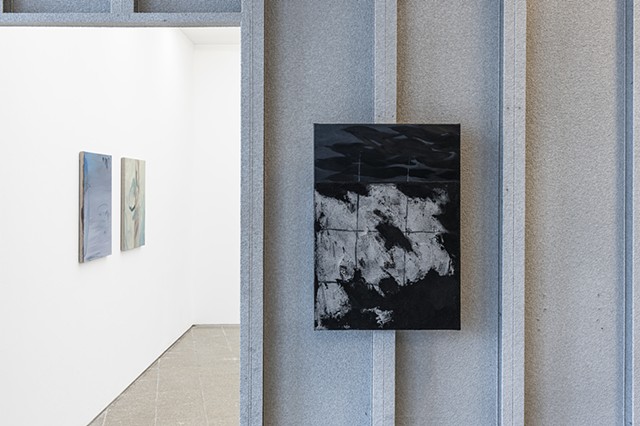 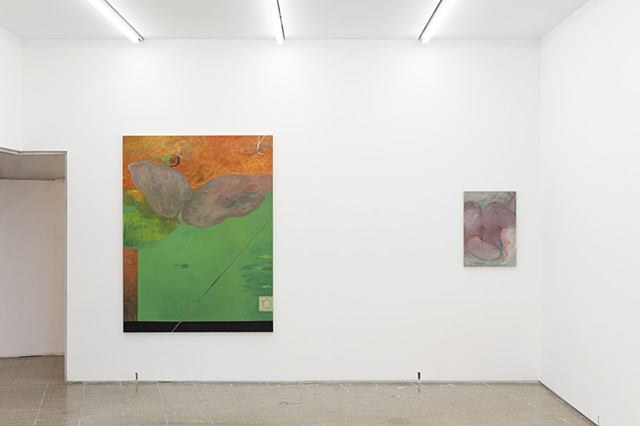 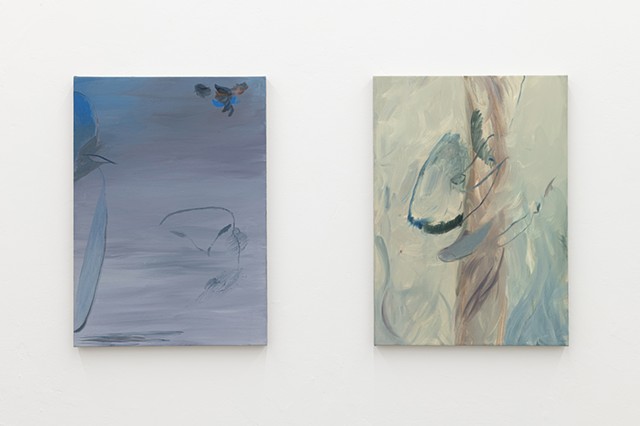 NoguerasBlanchard is pleased to present I don’t want to live in a world without feathers a proposal by Ester Partegàs on new works by Avery Z. Nelson (Rhinebeck, NY, 1983).

Nelson’s paintings originate in a need to capture the fleeting moment where the singular non-binary body finds its multitude and the collective. The sensorial remnants of last night’s dance floor occupy the canvas and the painting becomes an ocean, and a party, of camouflaged sensualities. Contours revealed by the strobe lights, perspirations and orifices shared at unison, objects caressing, all fall under the steady pump of hearts and flesh, now together, now apart. There is an intensity of contact everywhere by not letting the brush leave the surface. The body as ultimate experience, impermance its condition, rhythm and vibration the interface.

There is a trust that the subject is also the object, that if a little bit of green can agree to melt as red for the sake of chromatic progression, and a pair of ears want to morph into lungs to eventually, possibly, become testicles, art and life are also a unity in a constant state of change and exchange. The suggested landscape is for sure of avalanches and cascades, of all that can not be contained but only experienced.

“The title of the show came as a sort of orientation for the decorative, the ornamental, queerness. But also really for the ephemerality of a bird, ecology and fear of all the pretty things being on the threat of extinction. All the pretty things, I believe, are the magic.” (A.Z.N.)

These works depart from the dance floor to propose that life is the dance floor only worth living if you let feathers be the choreographers. The party must go on! (E.P.)

The heart of the exhibition is a series of three large-scale paintings entitled Pitcher 1, Pitcher 2, and Pitcher 3, each referencing a different meaning of the word.

Pitcher 1: (a person who pitches the ball to a batter) A clenched claw-hand extends from a large muscular form, gripping a red ball against a green playing field and burning orange horizon. Tension and hard edges make up this canvas, abstracted from a moment seconds prior to slinging the ball.

Pitcher 2: (Sarracenia also referred to as the Trumpet Pitcher plant) The carnivorous trumpet plant lures its prey with its beautiful pitcher-shaped traps. Lines and forms momentarily appear only to dissolve into an acid landscape of yellows, greens, and delicious pinks.

Pitcher 3: (slang for a top in a gay sexual encounter) Self-portrait as a dancing gay top with contours delicately emerging from a suggestive, misty landscape.

Additionally, there are 6 smaller paintings, each offering a poetic moment of pause: I Desire, Escape, Good Catch, Where are the birds, Flight, Cruising.